From Portraiture to Illustration: An Interview with Robert Liberace and Lina Chesak-Liberace

From Portraiture to Illustration: An Interview with Robert Liberace and Lina Chesak-Liberace 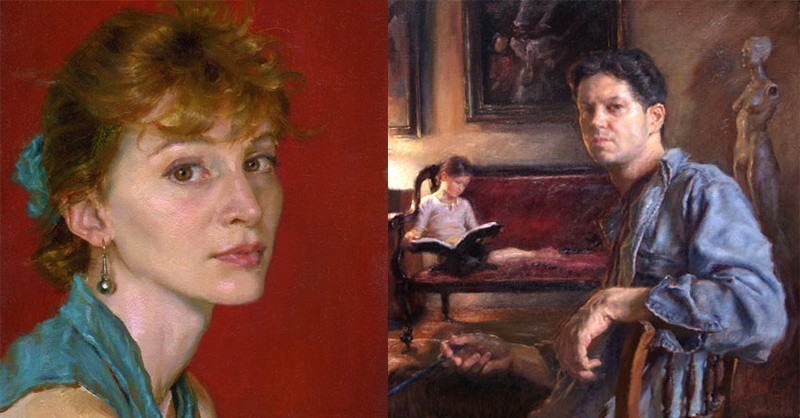 Robert Liberace and Lina Chesak-Liberace are married artists living, working and teaching in the Washington, D.C area. Robert is a classically trained portraitist and Lina is a professional illustrator. Read our interviews with both artists below. Robert had some tips for creating stellar oil paintings and Lina offers insight into the process of illustrating and publishing children’s books! All photos courtesy Robert and Lina Liberace. You may find more of Robert and Lina's artwork at www.robertliberace.com and www.linaliberace.com

Lina is a very gifted artist, creating works in drawing, painting and sculpture. When we first met, she was already a successful illustrator creating works for large magazines like National Geographic, and illustrating children's books. Celia and Ava are developing impressive skills in drawing and they seem to enjoy it. They have been brought up in a world of art and museums so they have developed an understanding and appreciation of the creative spirit and the power of it in our lives. I'm not sure that they will pursue art as a career like their parents, but they have an understanding of the creative life of an artist, which will certainly influence any path they choose to follow!

Who are your favorite artists? You paint in a very classical style, but are there modern painters who you look up to, or other artists we wouldn’t expect you to admire because of your style?

The Renaissance artists had a particular influence on me because of the unusual way they expressed their modernity by exploring works from the deep past. They turned away from the rigid Gothic and Byzantine models and looked at the Greeks to express their fascination with the naturalistic depiction of the human figure. I have an interest in any artist—whether it be Michelangelo, Schiele or Freud—who explores the human spirit through the form of the human figure. 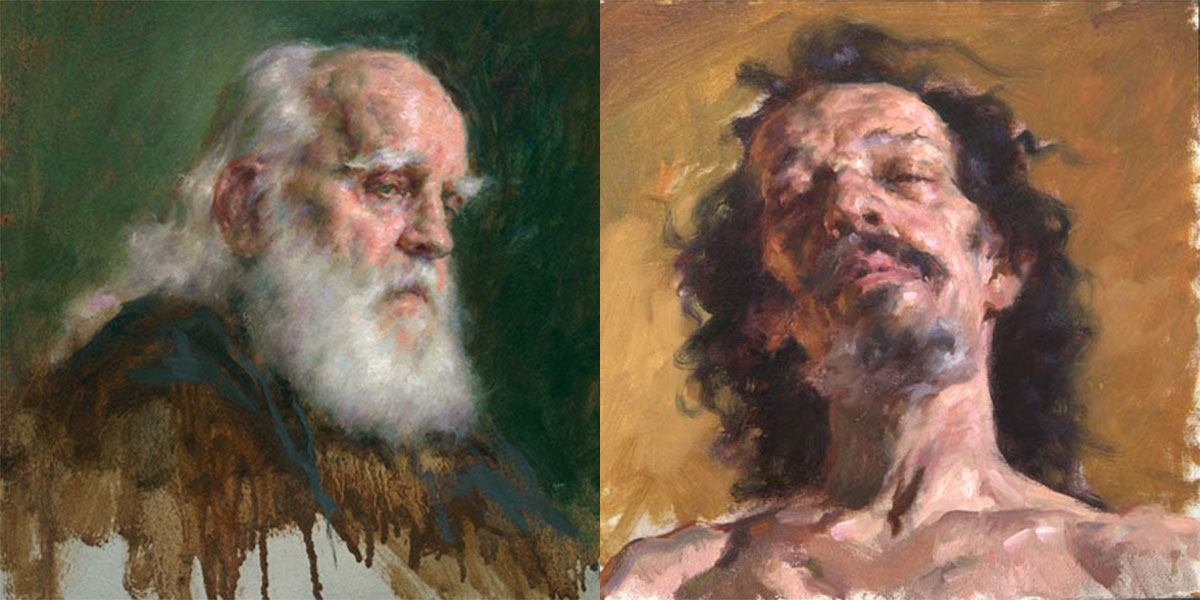 What is one of the most interesting portraits you’ve ever painted, in terms of the experience?

One of my favorite portraits is "John." The model reminded me of a Donatello penitent saint, made of flesh and blood. I always have an eye out for interesting faces like his especially those whose appearance does not belong to any particular time.

What are your favorite types of oil paint? Which colors would you recommend for a beginner building a portraiture palette?

I use almost any brand of oil paint.

I would encourage beginners to use brighter primary colors because they are capable of creating both strong and neutral tints, depending on the mixture. Cadmiums can be neutralized into brown and ochre tints but it does not work the other way around.

What is a mistake that new painters often make, or a tip that improves figure painting for many students?

Beginners invariably arrive in class with poor canvas that compromises the smooth flow of paint. Even cheap canvas can be upgraded with a coat or two of gesso.

In terms of rendering the portrait or figure, the task to render in a realistic manner is made easier the sooner students begin to understand the visual world in abstract patterns of light, shadow and color rather than particular features.

I see in your biography that you originally attended GW on a baseball scholarship. Were you both an artist and athlete in high school? Who is your favorite team?

In high school I was more focused on sports but in college I began a transition into the art world after taking my first drawing class. I have always been a Red Sox fan but I am developing a strong devotion to our local team, the Nationals. 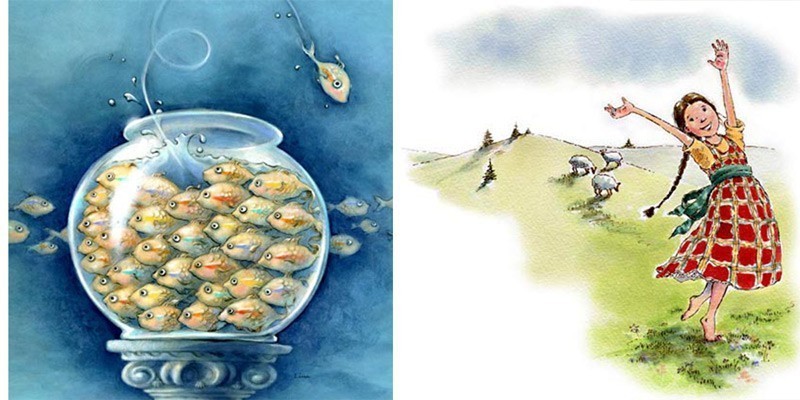 When did you first begin creating art and when did you realize that you could become a professional artist and illustrator?

I had an amazing high school art teacher who gave us great encouragement for doing whatever we wanted to do. I think the confidence he instilled in me played a big part in my choice of becoming a professional artist. My father was against my majoring in art but I knew once I got out of college I would just have to find a way. I don't think I ever had any doubts that I could become a professional artist but in retrospect, naïveté probably played a bigger part than I realized!

When you illustrate children’s books, are the authors very specific about what they want, or do you have a lot of leeway to create worlds as you see them? What is the process typically like?

I have illustrated two types of children's books. I have more experience doing children's books called "little books", which are created for school curriculums to help children learn to read. They are shorter and have a much quicker turnaround.  Because of this, the art direction is less heavy-handed. The author has no part in what is illustrated so I am really at the whim of the art director and editor. With regular trade books, normally the author has little to no input. Again, the editors and art directors make the decisions. These books are more scrutinized and while the turnarounds are still relatively quick, it is never a quick turnaround that is sometimes achieved for a little book. When I illustrated a book called "Polly Hoppers Pouch," my girlfriend Louise Rampersaud wrote it and asked me to illustrate it. Together, we presented it to the publishers, which is apparently the thing you're never supposed to do! She and I very much saw eye to eye on the project.

Who are your favorite illustrators? Who or what do you feel has influenced your illustration style the most?

My formal college art training had more to do with three-dimensional art such as textiles, weaving, and sculpture. Most of my early inspiration came from pouring over magazines such as Communication Art's Illustration Annuals and Print's Design Annuals. Therefore I drew inspiration from a wide variety of illustration and have a very diverse portfolio. Art directors will often want an illustrator to have a very specific style so that they know what they are getting. I have to ask the art director which piece they saw that they liked so I know which style to give them! I find in general I am drawn to illustration that has a very classical look or feel. I love some of that early illustration styles such as and NC Wyeth and Norman Rockwell. But I'm also drawn to watercolor when it comes to children's books. One of my favorites is Lizbeth Zwerger, an amazing Austrian illustrator whose sensitive but colorful style is slightly edgy. And then there are pen and ink artists who I know personally whose talent and wit is just out-of-control. These include Kevin Rechin, Nick Galifianakis, and a friend who has recently and tragically passed, Richard Thompson.

What are your favorite oil and watercolor paints, and do you ever experiment with other mediums? When do you chose to render illustrations in oil paint as opposed to watercolor?

I am an experimenter by nature but trust Winsor & Newton watercolors because of their intensity. I'm not so picky about oil paint because I think every tube of paint is unique and you might find an alizarin that you like with one brand and a cerulean that you like from another for whatever reason. I'm a bit spoiled having been married to Rob for so long I often just borrow paint from his studio since he is the expert when it comes to oil paints. With my sculpture, made from paper clay, I prefer acrylic. They are non-toxic, dry fast, water-soluble and you can build them up in layers very quickly and easily. I actually prefer the inexpensive craft acrylics because they come in so many colors and work just fine for my needs. 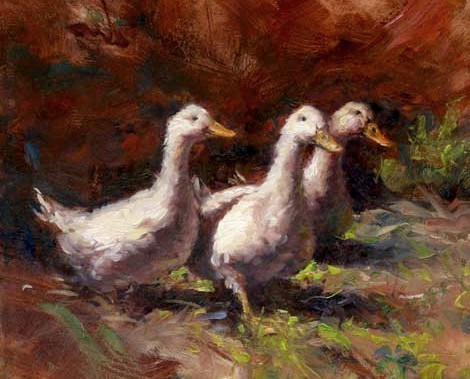 You’re a member of The Illustrators Club of Washington, Maryland and Virginia. How has being involved in a group of likeminded artists helped you grow as an artist?

I have not been very involved with them lately since I'm focusing more on fine art and sculpture, but I found that the Illustrators Club was invaluable for me to meet like-minded people who I could share information with and get help for anything from materials and methods to pricing a job. When working alone for sometimes 50 or 60 hours a week, it is wonderful to be a part of a community.

What was one of your favorite children’s books to illustrate, in terms of the content, the experience or both?

I had the most fun illustrating a little book called "Monster Under the Bed" written be Deborah Eaton. The character in the story happened to be a monster-child who turned out to have a puppy under his bed. Some of his features were described and I could make him look very scary but I knew he had to look cute and horrible at the same time, so it was fun inventing his image.

The turnaround was very quick so I did not have time to second-guess myself and the whole process clicked. Out of the hundred or so books which were published for that particular company, I was told it was the favorite book of the editor’s art directors, which was a wonderful thing to hear!

November 14, 2016
Did you like this post?
0
0
Comments
Copyright © Plaza Artist Materials of the Midatlantic, All Rights Reserved.